Today is a national holiday in Ireland--St Stephen's Day. While in some other areas of the country people are engaging in a post-Christmas shopping frenzy, in these parts things are quiet. I guess it's traditional for a community walk to be held on this day each year in Cong, a small town a few miles south of us. This year the walk was a guided one and was a benefit for the new community centre.

It was chilly and raining a bit, but there was a good turnout nonetheless. Of course, I was thrilled--it was my kind of day! By the time we were nearing the end of the walk, I was roasting though. It is sometimes hard to know how to dress here, but I am glad I decided against the wool sweater I was considering!

There were a few times that I thought we'd lost Bill as he lagged behind taking photos, which can be found here:
http://www.pbase.com/mikiruaq/cong
Posted by Shari and Bill Burke at 6:56 PM No comments: 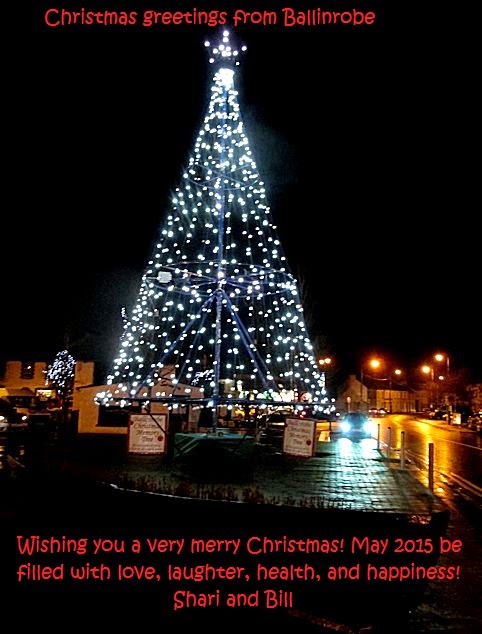 Posted by Shari and Bill Burke at 10:34 AM No comments:

A Few Days Before Christmas...

...and Ballinrobe is all dressed up for the season! We saw the first Christmas items in the grocery store during the first week or two of October when the Christmas cakes and puddings appeared. Then a few gift sets and biscuit tins showed up on the seasonal shelf next to the Halloween candy. On November 1 the home store down the street had a big sign up announcing that the Christmas Shoppe was open and their window was filled with trees and decorations. More and more stores created seasonal window displays and many of them have changed those displays a few times over the past couple of months. It's been fun to see them as we walk around!

On November 28 and 29, the Christmas Market was held in town, the lights went up, and Santa made a visit, arriving by boat and riding a bike around town. It seems like as the time goes by, more and more lights and decorations go up--Ballinrobe sure does know how to make the season bright :-)

Bill took a quick walk around the block last evening when he went downstairs to put out our garbage for the weekly pick-up. As always, he had his camera and captured some of the latest festive decorations. 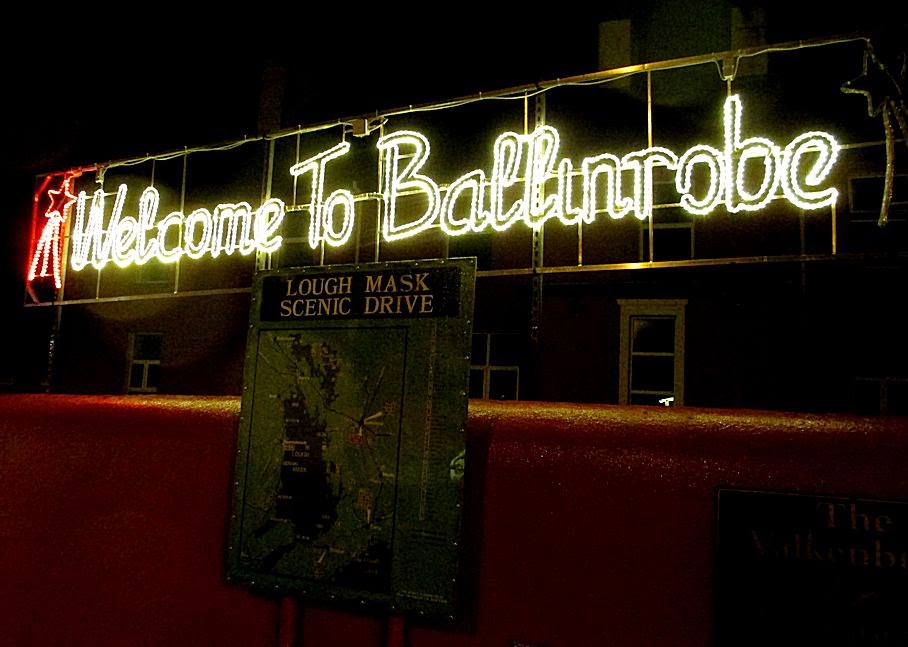 People coming into town from the south on the Neale Rd are greeted with this sign. 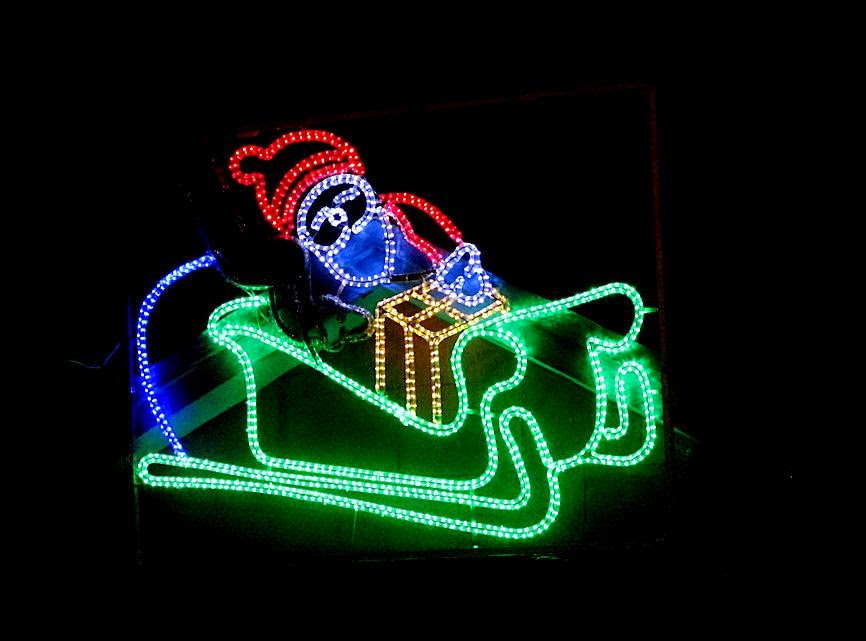 If they turn left onto Bowgate St and head towards Main, they get to see Santa. 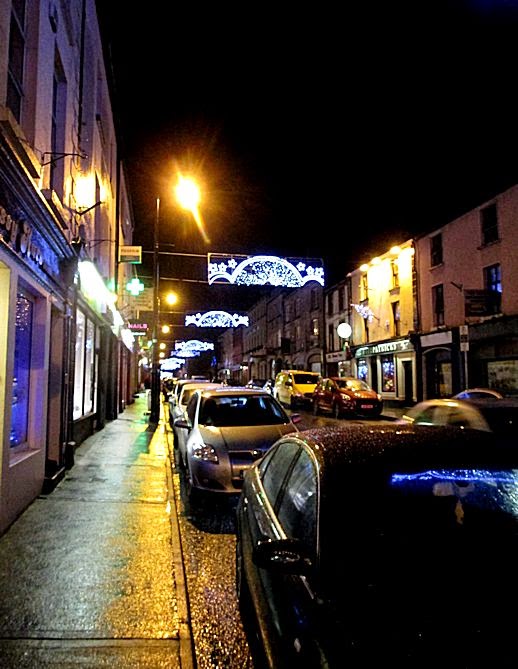 This flower shop has changed their window a few times over the past couple of months: Turning off of Main St onto Glebe, someone has a snow family in their window: 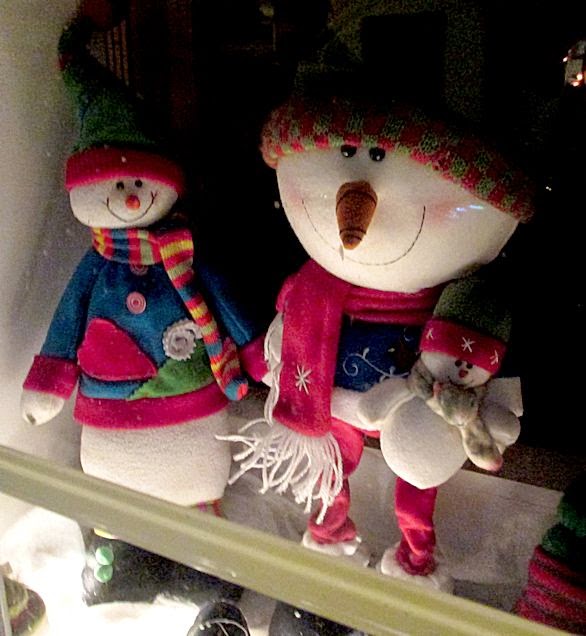 And turning off of Glebe onto New St, someone has a fruity wreath on their door: 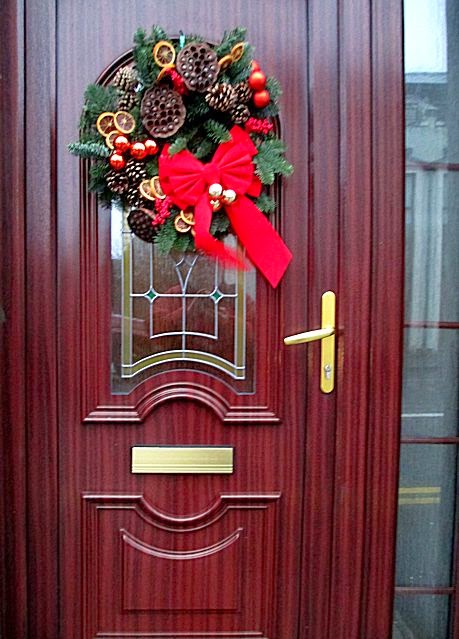 It's been a lot of fun to observe the ways Ballinrobe gets into Christmas, from the decorations to the foods that are traditional, it's a whole new world for us.

We wish everyone a wonderful holiday season, whatever holiday you celebrate--and even if you celebrate nothing at all--we hope the last days of the year bring you joy and peace!


Posted by Shari and Bill Burke at 6:15 PM No comments:

This past Friday and Saturday the Christmas Market set up in the parking lot outside the library. There were a few tents around with small, local businesses offering their wares, some food vendors, and some craftspeople. It did not rain and was seasonably chilly. Bill and I strolled over to see what it was like. 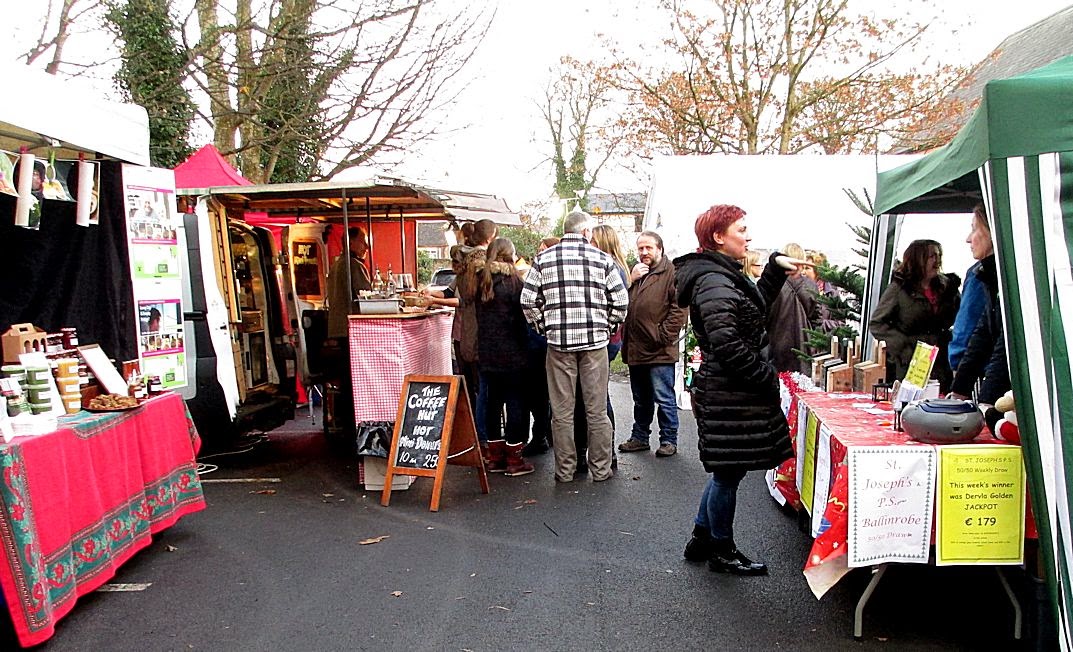 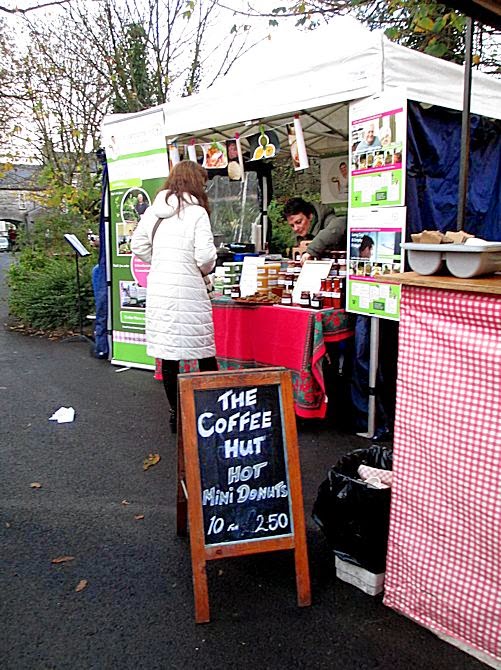 It did not take long for me to spot the woman with the table full of yarn! I walked over and grabbed a skein of sock yarn that was sitting in a basket to check fibre content. The woman commented that she forgot to mark those skeins, but said they were 3.50 euro. I checked the fibre content again to make sure it really was wool and nylon. It was. I checked the yardage. As I thought, it was 400+ yards. I bought the four skeins she had--two grey/purple and two grey/green and was thrilled to get them. Sock yarn is thin, so that yardage will provide me with many hours of knitting/crocheting joy!

On our way out the other side of the library grounds, we passed the crib (nativity scene) complete with live donkey. 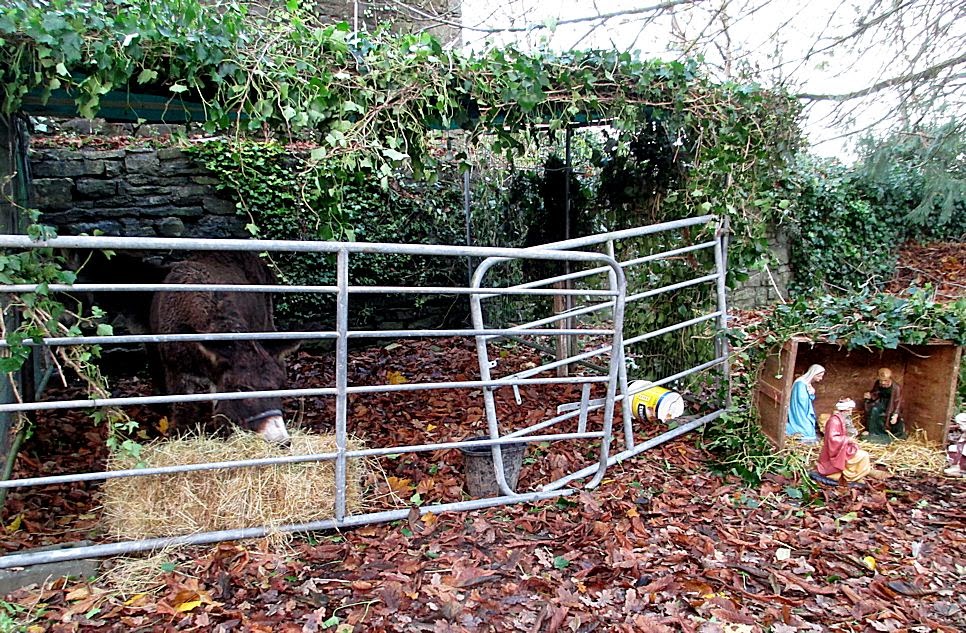 We headed out to Main St, where there were still more Christmas windows to see. 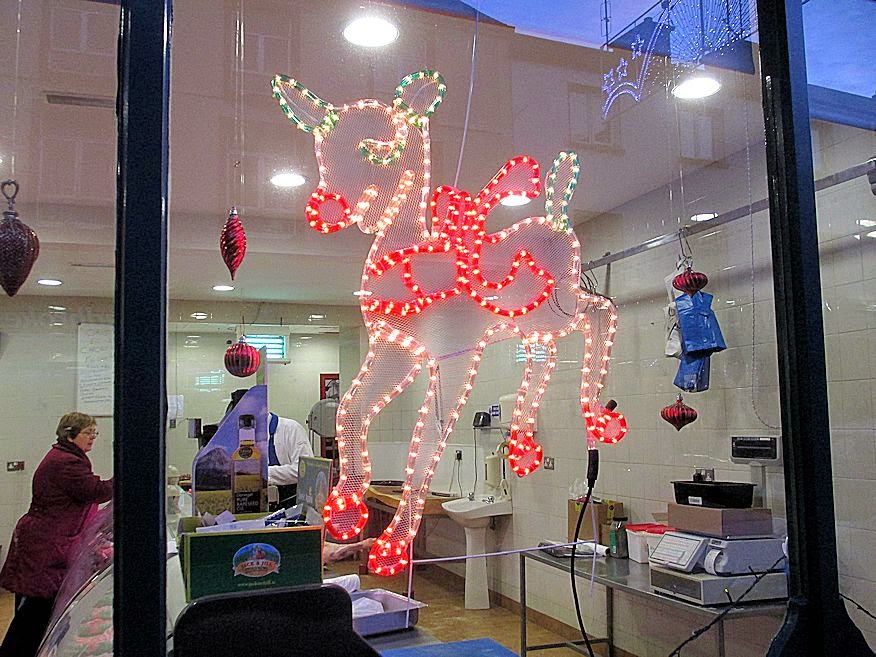 Rudolph was in the window of a butcher shop. Looks like he's running. 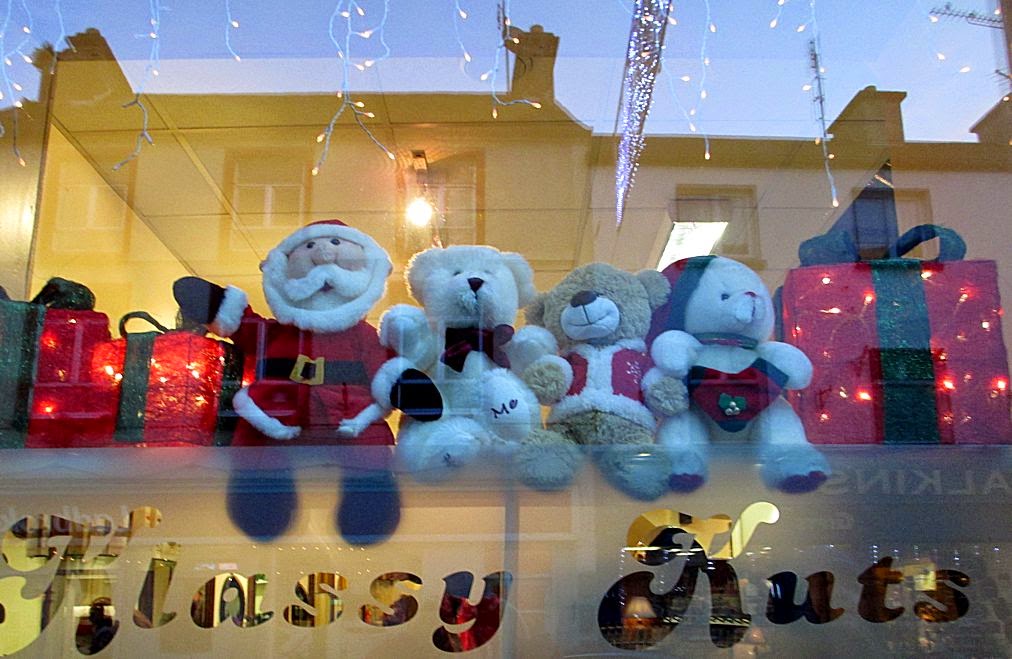 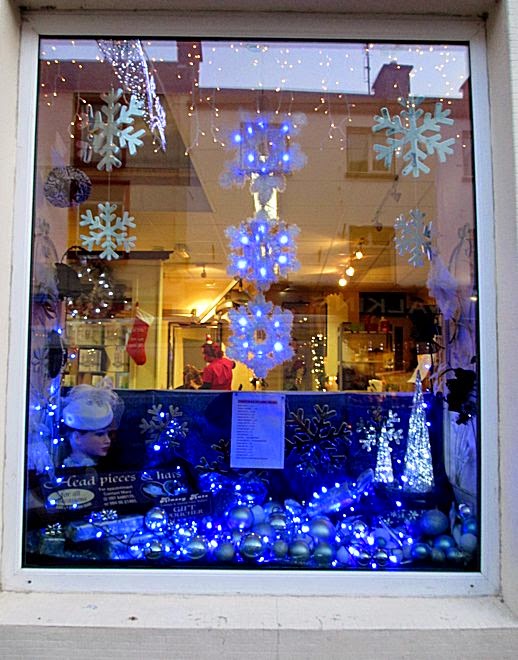 The two photos above are the windows of a hair salon. While Bill was taking the bottom photo, a woman in a cute black hat with a little piece of netting over her face stopped and asked if he wanted to take some photos of the windows in her antique shop down the road. Of course he said he would, so we followed her down there. 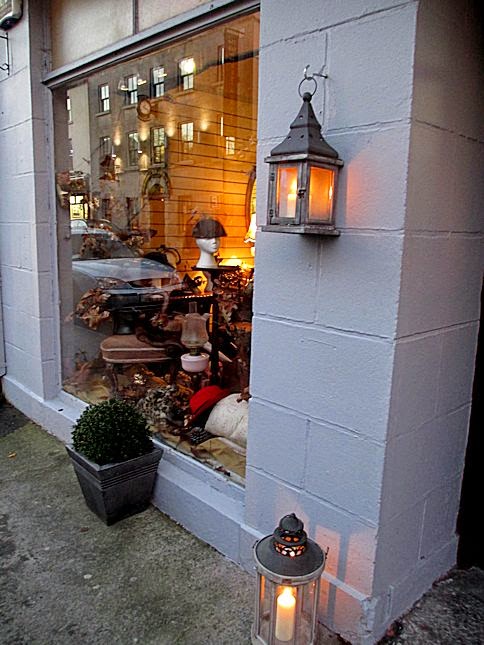 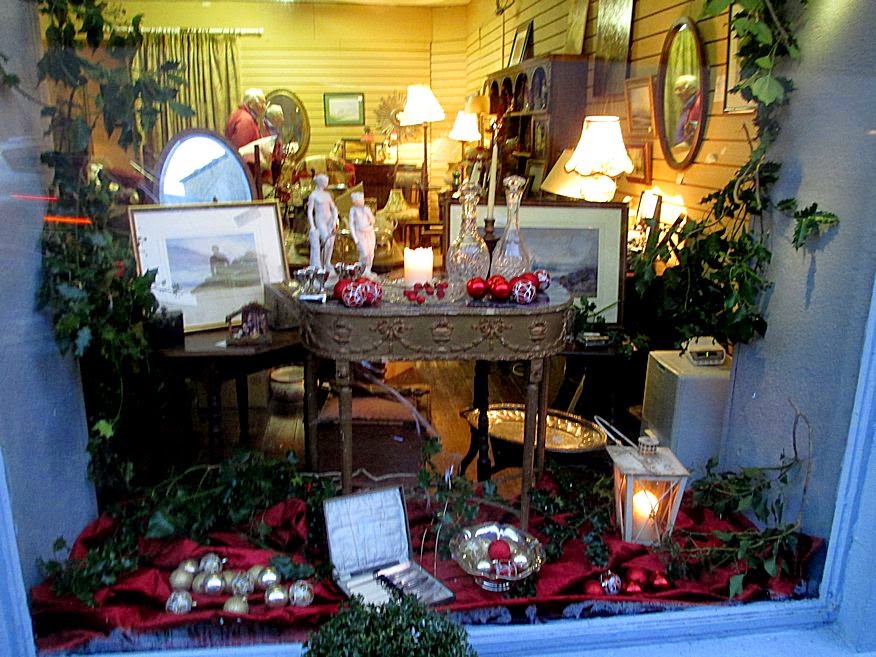 There are some nice windows on Glebe St, too. The art studio is one of the most interesting and creative, given the addition of original art to the display! 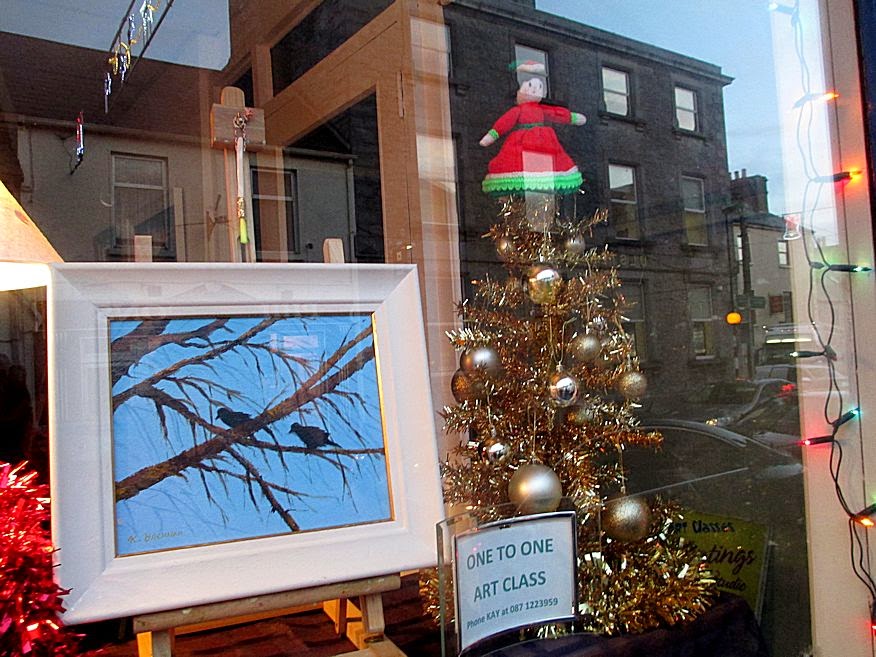 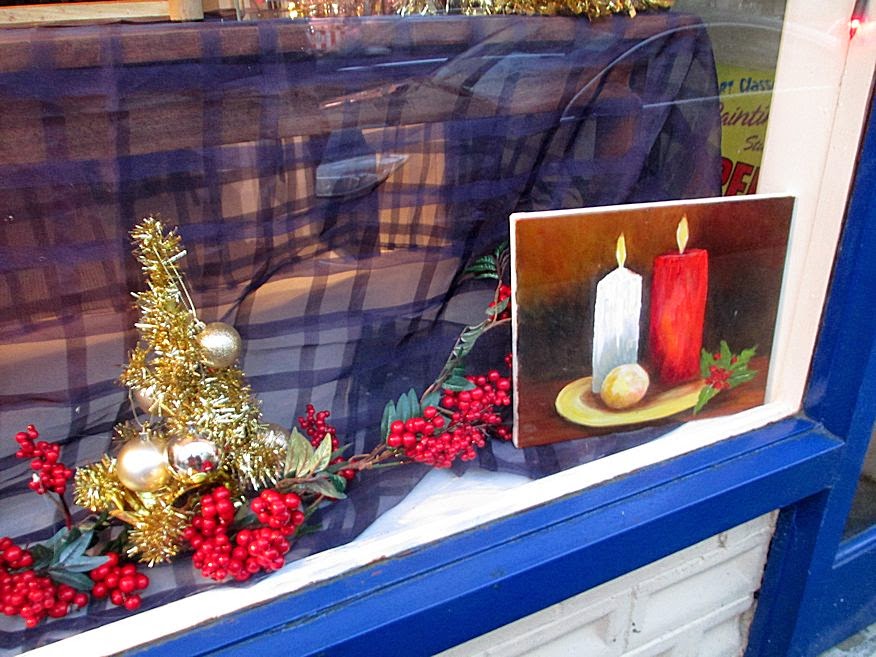 The meat market on Glebe avoided animals and went with a Christmas tree for their window :-) 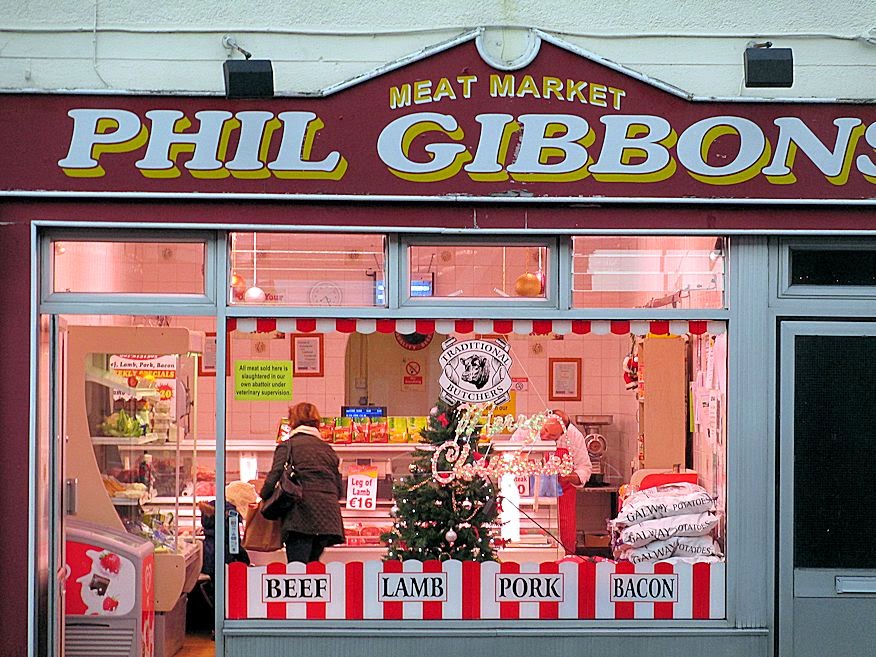 It's not just windows anymore, either. The lights have been hung all around town.
Main St at sunset: 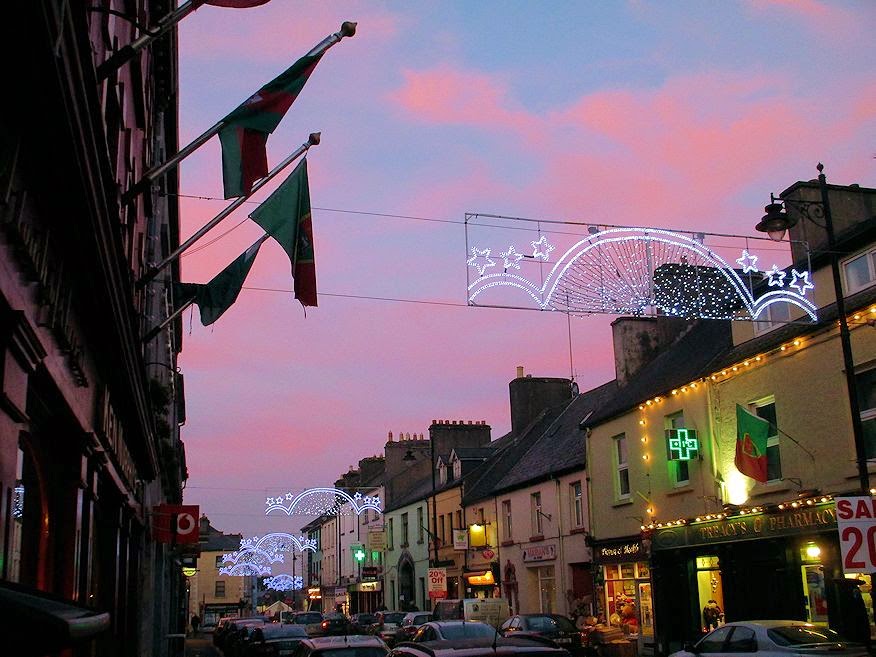 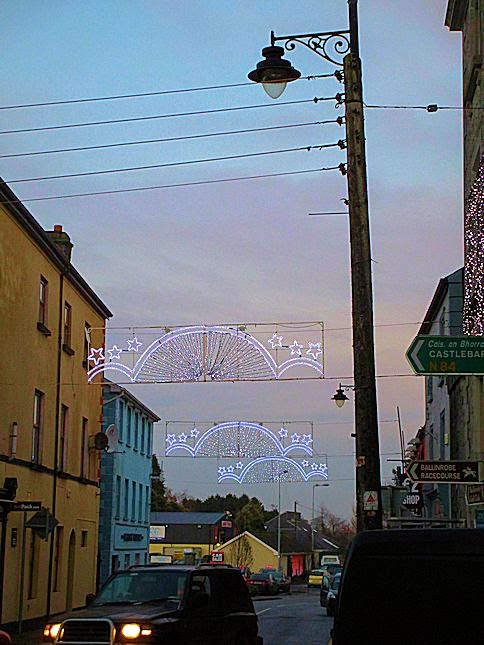 On both ends of Church Lane--here is Main and Church 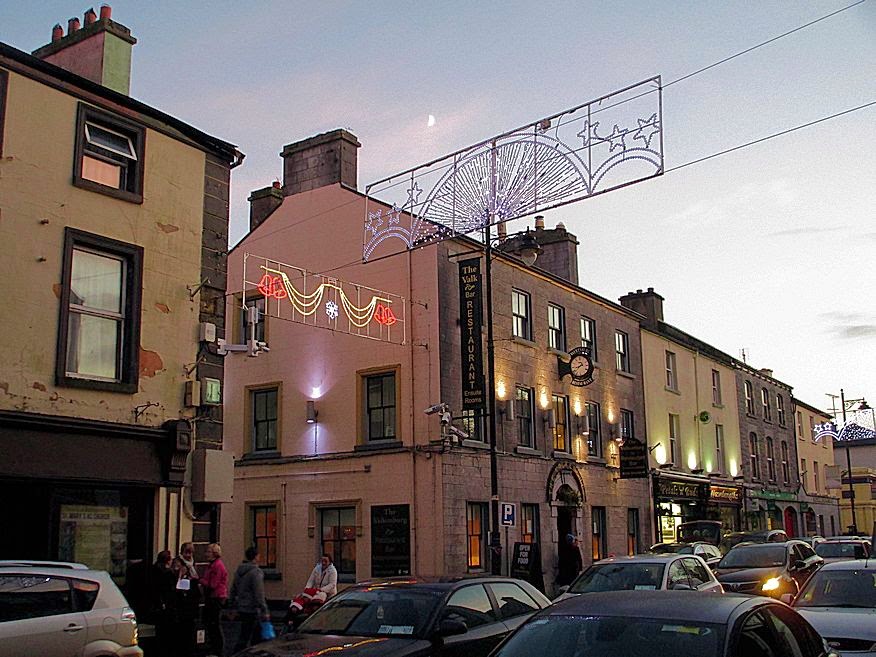 And here is Church and New St: 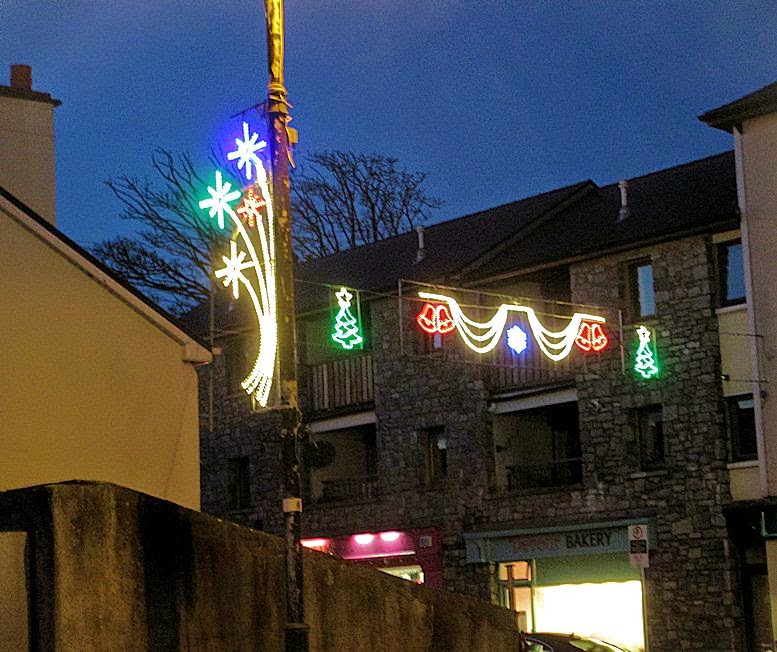 New St is also lined with lights--plain white lights are strung along and lighted images like the fireworks above and some bells line both sides of the street. The whole town looks quite festive!

We'd walked over to The Green to await the arrival of Santa, who, I understand, took a bike ride around town before heading to his spot in the library. We ended up leaving before he arrived, because Bill was starving and needed to get something to eat fast, but there were lots of people there to greet Santa and escort him to the library!

Even though the lights were lit on Friday, the "official" turning on of the lights was done last evening. We saw a few Facebook posts saying the festivities were going to be "in town" at 5 o'clock. I suppose everyone knows where "in town" to go for this kind of thing, but we didn't. It's a small town and we could have gone out and walked around until we found a bunch of people--we had a small list of possible places that seemed likely for such an event--but we were having a very quiet, peaceful, and relaxing day and the idea of walking around looking for the event didn't appeal, so we stayed home. From some photos I saw, it looked like lots of people turned up to see the lights go on officially.

I quite enjoyed walking around town for a couple of hours on Friday. Lots of people were out and about and there was a great community atmosphere. Christmas season is in full swing here in Ballinrobe!
Posted by Shari and Bill Burke at 6:42 PM No comments: